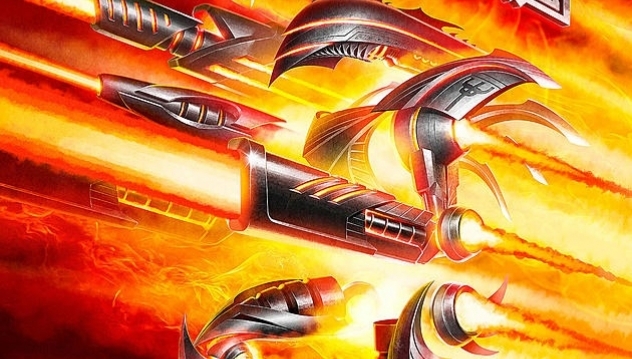 Loud as fuck and arrogant as a cock in a nunnery, classic heavy metal has always belonged to the streets and has always been British. Its problems started when they stopped manufacturing it there. That happened a long time ago, but those who grew up with this crowning achievement of the Western culture still want it that way.

The bands that can deliver though are now very few in numbers. Let’s add the unpleasant fact that this is likely to be the last studio input from Glenn Tipton because of the breaking news of his Parkinson disease and it’s no wonder why this new PRIEST album is so viral now.

Is 'Firepower' that amazing? My short answer to this would be no. To me it’s not much different than its predecessor 'Redeemer of Souls' and I am not surprised that some of the material was written back then. 'Lightning Strike' for instance sounds a bit like the self-titled track from the previous record.

Even if we take out the similar choruses and the lookalike guitar solo shells that fly right after the choruses in both songs, calling this approach formulaic is like calling trees wooden. 'Children of the Sun' starts and ends like a mix of 'March of the Damned' and 'Secrets of the Dead', although the slow part in the middle saves it from being a sheer simulation.

This doesn’t mean that 'Firepower' is a crap album. Quite the contrary, it’s very strong. It’s certainly better than all the Nostradamus and angel stuff done in the near past. Let’s not mention the abominations recorded with Tim Owens. I listened to them recently and I must admit that they had not grown old gracefully to say the least.
Songs like 'Never the Heroes' and 'Rising from Ruins' can make any PRIEST fan burst into tears of joy. 'Flame Thrower' shoots you from point blank and 'Spectre' waves a giant guitar solo in your face in a typical midtempo manner. 'No Surrender' is my personal fave, while 'Guardians' and the closing 'Sea Of Red' add hell of a drama to the album in a very positive way. There are some fillers like 'Lone Wolf', but all in all this is it, the new JUDAS PRIEST album. It’s neither better nor worse than the previous one, which means it’s not the best since 'Painkiller'. It would probably be the last good one, but that’s a completely different story. Without K.K. and Glenn, one can hardly believe that there could be PRIEST at all. We will ever see them again on stage doing what they do. Take a minute and think about this.
Source: RadioTangra.com
Tweet
Previous news: ODD CREW to meet with fans at three listening parties for the new album
Next news: ALBUM REVIEW - JUDAS PRIEST - 'Firepower'