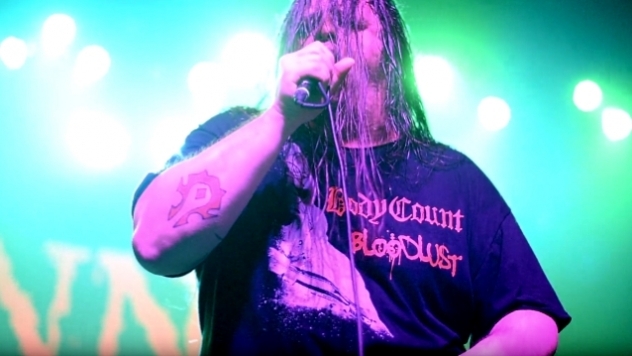 'Red Before Black', the new video from Florida death metal veterans CANNIBAL CORPSE, can be seen below. The song is the title track of the band's latest album, which was released in November 2017 via Metal Blade Records.

The 'Red Before Black' clip is from the mind of horror FX veteran Doug Sakmann. The concept builds upon the world brought to life by Zev Deans in the previously released 'Code Of The Slashers' video but adds significantly to the visual gore department. Sakmann shot the concept in Philadelphia, Pennsylvania and the live footage was captured by Jesse Davis in San Francisco, California. The video stars adult performers Nadia White and Talia Satana, as well as actresses Sonja Century, Kim Reo, and actor Alex Webster as the final kill of the video.

CANNIBAL CORPSE is currently on tour with SLAYER, LAMB OF GOD and AMON AMARTH.
Source: blabbermouth.net
Tweet
Previous news: KIDS up to 10 YO with a free addmission to the DROPKICK MURPHYS show
Next news: ALEX BOYADJIEV's PANIC ATTACK SHOW is TODAY - kicks off at 4 PM