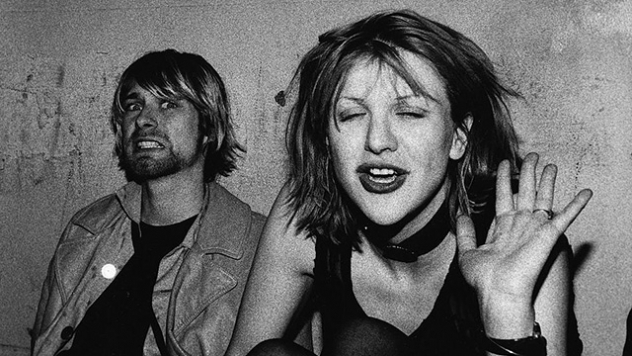 NIRVANA's Kurt Cobain and HOLE's Courtney Love were rock's reigning couple in the early '90s, but it was the rare occasion when the two actually performed together onstage - so rare that it happened only once.

Soundboard audio of the pair's September 1993 performance at Los Angeles' Club Lingerie has circulated online since 2007 (but recently resurfaced via Louder Sound), with the couple working through two familiar songs for the crowd.
Their appearance came as part of a benefit, Rock Against Rape, with the couple first performing NIRVANA's In Utero favorite "Pennyroyal Tea," with Love taking the lead for the most part. They then played a cover, trading off vocals on LEADBELLY's "Where Did You Sleep Last Night?," which fans will recognize from NIRVANA's MTV Unplugged special that was filmed and recorded just two months later.
Love had initially appeared onstage minus Cobain, playing "Doll Parts" and "Miss World" from HOLE's Live Through This album, which is not part of the recording below.
"Watch closely. This is the first and last time you'll see this happen," Love told the crowd in response to her sharing the stage with Cobain.

Despite Love calling it their "Sonny and Cher" moment, the couple would not grace the stage together again. Cobain died at the age of 27 on April 5, 1994, just months after the benefit performance.
Source: loudwire.com
Tweet
Previous news: MARK FOGGO SKASTERS release new video and single - 'Rats and Mice'
Next news: Two fantastic live shows of WHITESNAKE and VAN HALEN today on the radio