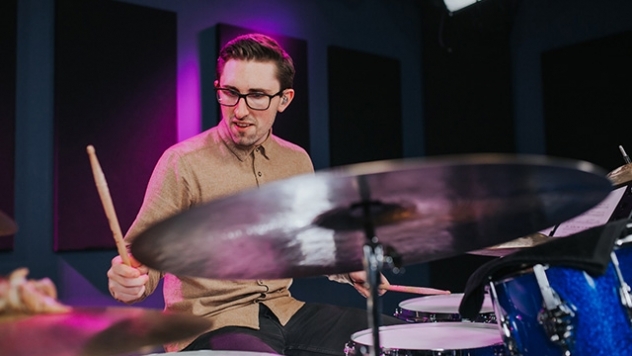 In the video, Toews plays sections of every RUSH song from every RUSH album, with all 175 segments arranged to flow seamlessly together to create a 24 minute masterpiece.

"Brandon Toews is a huge Neil Peart fan, so as a tribute to The Professor, he put together this drum medley over the course of 10 weeks," say Drumeo.

"He recorded full takes in their entirety (nope… we didn’t just piece this together song by song) and used transcriptions available in DrumeoSONGS [an app that provides song breakdowns and play-along tools for aspiring drummers] to learn the parts.

"The setup Brandon used for this performance incorporates different elements from the drum kits Neil used over his 40 years with RUSH. This includes the legendary tubular bells, gong drum, and electronic pads."

"This was a huge project to put together, definitely one of the most ambitious projects I've ever attempted," adds Toews. "But it was an absolute honour to pay tribute to Neil. I recorded four or five full performances in their entirety and then we chose the best angles for the final video!"

Toews is based in Vancouver, Canada, and is the author of The Drummer’s Toolbox and the co-author of The Best Beginner Drum Book. He's also a Project Manager at Musora Media Inc., home to Drumeo and to other online music education platforms Pianote, Guitareo, and Singeo.