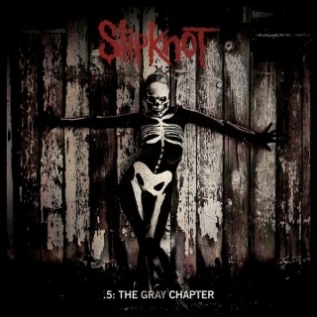 Most people are usually just in the position of consumers of music, so they rarely realize what it takes for the musicians to actually make it. But in this case, you should be well aware that after all Slipknot went through since 2008's 'All Hope Is Gone,' the very existence of '.5: The Gray Chapter' is a small miracle. And the fact that the album fucking rips is a welcome – but in no way unexpected – bonus.

But lets start with the elephant in the room. How does losing two key members reflect on Slipknot's music? Hardly, if at all. And it's not that Joey Jordison or Paul Gray didn't have a significant contribution or weren't important to the band – for God's sake, the album, and 'Skeptic' in particular, are dedicated to the late bassist! But Slipknot has never been about personalities. This is what the masks, numbers and jumpsuits are ALL about, remember? The band's goal has always been to create total musical chaos, among which emotions would explode in their most primal form.

Well, in '.5: The Gray Chapter' the nine musicians once again throw everything they can against the wall – and a surprisingly large amount of it sticks. Before going into Slipknot's trademark jumps from groove metal into extreme metal and back, 'Sarcastrophe' starts with an intro that resembles 90's Depeche Mode. 'AOV,' in turn, is like speed metal translated into a nu-metal language. 'Killpop' starts off like a pop song that leads into a sudden angry outburst – only to take an even more schizophreniac turn by letting the music go even angrier, while the vocals go back to being melodic. In 'Lech' some aggressive electronics take over the metal in a way that resembles something like the Prodigy on steroids. And then, the closer 'If Rain Is what You Want' is an eerie semi-ballad, in which dark ambient parts with echoing percussion take turns with some heavy chords – it is the Slipknot equivalent of the music that plays during the rolling credits of a violence filled Tarantino movie.

In between, you get a few songs that are closer to Slipknot's typical sound, like 'The Negative One,' 'Custer' and 'Nomadic' (which even ends in a way, quite similar to 'Wait and Bleed'). This way, the whole chaotic diversity of the music takes some form and sounds complete and focused. But this is no surprise. After all, during all of its career so far this band has been perfecting exactly the art of creating controlled chaos. In '.5: The Gray Chapter' it is more refined than ever.