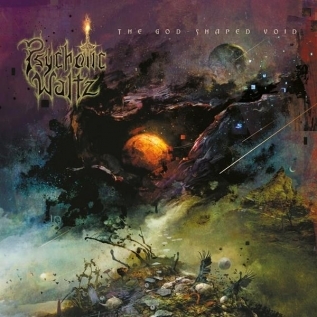 PSYCHOTIC WALTZ never got the attention they deserved and remained a cult band. Nowadays some eclectic prog metal minority circles consider their debut album ‘A Social Grace’ a legend, but as far as I am concerned, back then they were not recognised to say the least.

Those were the last days of the long niche subgenre definitions. PSYCHOTIC WALTZ from California were in the same weird bubble, as WATCHTOWER, SIEGES EVEN, TARAMIS, HADES and other now forgotten bands labelled as progressive thrash metal, that were simply incomprehensible to the ordinary straightforward metalhead. The band had nothing to do with QUEENSRYCHE and DREAM THEATER’s habitat. They substantially differed, not only because of Buddy Lackey’s (a.k.a. Devon Graves) bizarre vocals), but also because of the flute, which was considered a bit odd instrument to have in a metal band but helped some of us to discover JETHRO TULL quite early. Mind you, those times were entirely different from what we have now.
PSYCOTIC WALTZ’s legacy consists of 4 albums and in between Buddy Lackey released his excellent but very obscure solo effort ‘The Strange Mind of Buddy Lackey’ (1993). That was way before he started his DEADSOUL TRIBE. We also need to mention END AMEN – a short-lived, but very strong collaboration between Norm Leggio (drums) and Dan Rock (guitars) of PSYCHOTIC WALTZ  and Uwe (vocals, guitars and keyboards) of DEATHROW.
All in all, ‘The God – Shaped Void’ is the first thing PSYCHOTIC WALTZ have recorded since 1996, and in their original line-up. Even Travis Smith’s artwork is reminiscent to the original twisted ones, done by Mike Clift, who was hit by a car and tragically passed away 5 years ago.
Ironically, there’s a variety of expectations related to this album, but the similarities and differences with the band PSYCHOTIC WALTZ once was and now become clear during the first few minutes. Beyond doubt, this is a continuation of the dark, weird and melancholic world, already known to all who have been involved with the band in the past.  Even if you sit passively throughout the first three songs, the catchy, although immense ‘All the Bad Men’ will hook you and smash you right away and ‘While the Spiders Spin’ will blast your face off with such a dramatic overtone that suddenly the day to day topic of isolation and addiction to the virtual social reality starts to leave a bitter taste of a dead end street, probably for the first time in my life, and reminds me of ‘Little People’ from ‘Into the Everflow’ (1992).

Devon’s flute’s triumph is in ‘Demystified’, but there’s a balance everywhere, that serves the content. Nothing is too much or too lavish. Devon’s voice is not weightlessly frivolous as it was in the early years but is now structured in the best traditions of DEADSOUL TRIBE.
This can embarrass some people especially those who expect the band to return to their roots. This is, in fact, looks quite similar to what happened to the last SANCTUARY album that had more of a NEVERMORE feel to it.
Apart from these technicalities ‘The God – Shaped Void’ is a monster of an album with dozens of different dimensions, that could be hardly analysed in such a small review.  These 11 songs are spread over almost 60 minutes and they create their own universe and live there entangled in each other.
In another world PSYCHOTIC WALTZ could have become a several likes more popular and even, viral, as they say. Not in this one though and they could not care less, I believe.
Tweet
Предишна новина: OZZY OSBOURNE – ‘Ordinary Man’ (2020)
Следваща новина: DIIV – 'Deceiver' (2019)