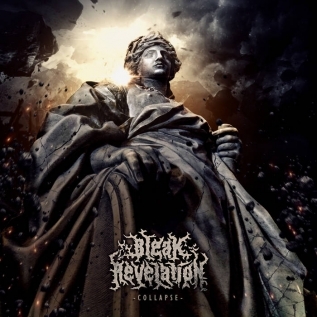 I haven't listened to a Bulgarian metal album so deeply for a long time! BLEAK REVELATION’s Collapse came out at a time when the world was still looking around confused, overwhelmed by the unprecedented epidemiological situation, gripped by the collar of the economic crisis and kicked in the ass by a police boot, so to speak.

Just about time! Many bands have buried their plans and hopes for 2020 and postponed not only touring but also the release of new music. However, BLEAK REVELATION didn’t seem to hesitate releasing their album - a choice I personally applaud. The title is spot on, as well as the openly apocalyptic element in the overall sound.

My listening experience starts with the clear idea that I have lost track of what is currently relevant in metal for a long time, especially in the classic incarnations of the genre. From the first track DROWN it is clear that we are talking about Doom, neatly mixed with Death Metal, but clearly that's not everything “Collapse” offers in its 50 minutes length. Towards the third track - THE MISANTHROPE - freezing vicious black antics and quotes from Schopenhauer begin to creep in, along with the spirit of late 90s Gothic classics.
There’s certainly a lot of technical playing, but the good news is that for the most part this album is heavy and consistent, without unnecessary fireworks. Going into the depths is quite tangible with the beginning of THE WEB OF YOUR BETRAYAL, where the album is closest to its Doom roots. Many people will draw an inevitable parallel with bands like PARADISE LOST - which in this case is more of a compliment, and the guys do not seem to hide them as influence. The album really shines after the second or third listening, which for me is a sign of a certain depth. The production is very good, without the record suffering from a sterile sound in an attempt at modernity.
The biggest advantage for me is that Collapse sounds classic and free from the intrusive eclecticism of many modern metal bands. Fortunately, BLEAK REVELATION doesn’t aim to invent some new style or try mix paradoxical elements. In this sense, there are no surprises.
I highly recommend it and I even guess that those who are better oriented in style will find even more good points of contact in this new album.
Favorite track: THE MISANTHROPE
Tweet
Предишна новина: PARADISE LOST - 'Obsidian' (2020)
Следваща новина: DREAM THEATER - 'A View From The Top Of The World'