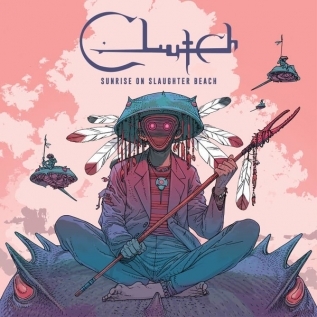 Change is not a function we connect with CLUTCH. Yet it is constant even though in imperceptible portions in short terms but palpable in the full picture.

Make the effort to hear their debut album from 1993 “Transnational Speedway League”, after that listen to the sixth “Blast Tyrant” 11 years later and then the brand new “Sunrise on Slaughter Beach” and you will witness totally different records – from aggressive, almost hardcore southern metal, through epic blues and boogie moves to the current rock’n’roll funky groove rodeo.

Maybe this comes from the fact that for the 31 years they play together, CLUTCH consists of the same high school  friends – Neil Fallon (vocals and guitar), Tim Sult (guitar), Dan Maines (bass) and Jean-Paul Gaster (drums). These guys are so tight together that probably it is enough for them just to be in the same room together and a pure rock fury will flow from their instruments.
“Sunrise on Slaughter Beach” both reminds to the previous “Book of Bad Decisions” and it differs from it. It almost lacks of aggression that has surprisingly sneaked in its predecessor. It is tangibly shorter (spanning only in 33 minutes).

And there are elements we have never heard with CLUTCH before – theremin, vibraphone and female backing vocals. Purposeful, slightly dark, slightly angry, the album surprises with its direction even the musicians who recorded it – they claim that in the two years of isolation they aimed towards more joyful and vivid mood. But while playing the new tracks they realized they just pull them in other direction and you can’t force the muse. So they just let go on the stream of the river of inspiration who took them to the sunset of Slaughter Beach.
We hear the typical for CLUTCH groovy rock tracks (“Nosferatu Madre”, “Three Golden Horns”), we have an epic (title) song, which this time doesn’t bring the hymn core like “The Regulator” or “The Face” did - “Sunrise on Slaughter Beach” is tighter, more direct yet its chorus echoes in your mind long after the song has finished. And we also have a few high-octane blasts ("Red Alert (Boss Metal Zone)", "We Strive for Excellence") that ignite fires in your heart and make you feet stomp the floor while your head nods the tempo.
“Sunrise on Slaughter Beach” is an album you love more and more with every spin. Probably your neighbors too because you just cannot listen to it quietly.

There’s nothing calm about the music of CLUTCH. There are no compromises either – something they can comfortably afford now, 13 albums (14 if we also count the collection of unreleased songs “Slow Hole to China”) and 31 years. And their road is only straight ahead, top gear. In a muscle car, roaring on hot rock’n’roll with pure high octane.
Tweet
Предишна новина: MACHINE HEAD – ‘Of Kingdom and Crown’ (2022)