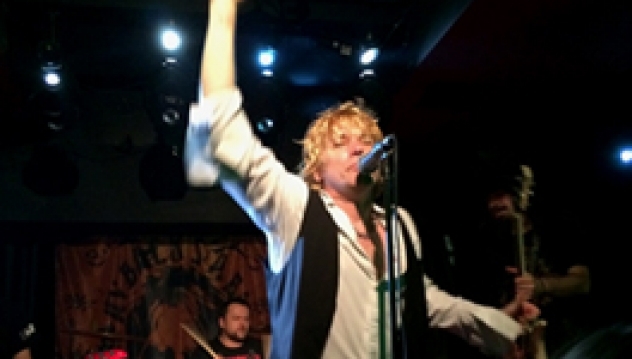 He’s been called the last true rock’n’roll front-man, one of the most charismatic characters in rock music. Kory Clarke is a poet, an artist, a visionary. He is one-man revolution against the system. Detroit born Clarke who once started the legendary WARRIOR SOUL as a bet is here in Sofia tonight and still is the tireless rebel we expect him to be.

DAILY NOISE CLUB are the perfect opening act tonight. And if making a rock’n’roll noise louder than any other band of their kind around isn’t enough, there’s this not so subtle curiously anarchic level to their performance that make them sound a little bit more threatening, almost like a punk rock band. The set itself is a magnificent encapsulation of their career, concentrating on the meatier and grittier stuff.

DNC may play loving tribute to the bands that made the 70’s and the 80’s  the primordial goop from which all decent music evolved, but their floor-stomping boogie and the sex-drenched anthems put a definitive signature on the night, plus they have a new album coming in April so you better watch out for these guys.

No one strips himself down to the artistic core quite like Kory Clarke. He looks tentative and even frail at first, but the way he attracts everyone and the impact on the audience are unbelievable.

This is it. From the first seconds of  'Punk And Belligerent' to the last drop of sweat dripping from the closer 'Wasteland' this abundant, 2-hour set is fucking impeccable in every possible way. Being the one who he is, Kory doesn’t mention it, but it hasn’t been road-tested or well rehearsed, because he has done it especially for the Bulgarian show.

Most of the songs come from the cult first three WARRIOR SOUL albums, but then you get “The Drug” and “Rotten Soul” off the “Space Age Playboys” (1994), which is totally fantastic. His back-up band for this show, MARAUDERS INC., is extraordinary. The guys nail each and every song as they have played with Kory for the last couple of years, reaching the towering pinnacle on this thrilling performance when they get to the  “We Are The Government” part melting into JOY DIVISION’s “Interzone” and then exploding into “Love Destruction”. Stunning.

In conclusion, time was dedicated rockers had their very own view and say, but those days are gone. It’s mere business now. Rock music has detached itself from its roots and has become too safe. Not Kory. He’s a party animal. He’s an artist, belonging to the dying breed of people who actually believe in what they are doing. He’ll sing for 2 hours and then he’ll sign your records, he’ll drink with you till the morning. And he’ll be hugging you and he’ll be shouting out his own lyrics along with you. How often do you have the chance to hang out with your heroes like that, eh?