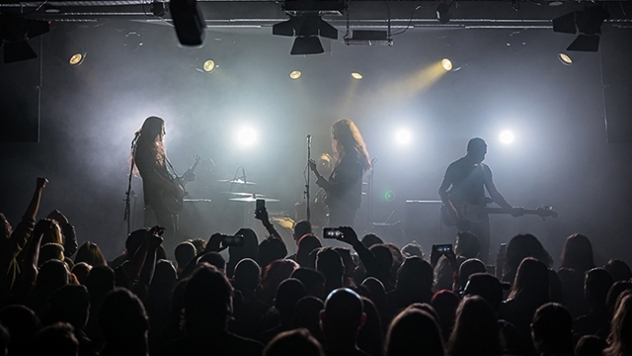 Birds in Row
Kælan Mikla
‘Mixtape 5’ Club, Sofia, 26.2.2020
radio Tangra Mega Rocks's 14th Anniversary bash
text: Nikola Shahpazov, photos: Orlin Nikolov-Orleff
GALLERY
ALCEST were actually supposed to join TANGRA MEGA ROCK’s ever so lavish birthday celebrations back in the Autumn of 2017. Back then some unnamed and unforeseen circumstances prevented mainman NEIGE and his upstanding band to join ANATHEMA for a gig at ‘Orpheus Studio’. This came as a huge disappointment for us - after all, the band had just released the splendid ‘Kodama’ and we couldn’t wait to hear those tracks live…
So, we had to wait but it was well worth it - this February 26th ALCEST played a headline show, presenting highlights from their crafty 2019 release ‘Spiritual Instinct’ plus this and that from their previous 5 albums. What’s even better, their support bands were both very different, but very intriguingly fitting in the concept of the show (and tour).

Most surprising was the inclusion of Icelanders KÆLAN MIKLA to the bill - they’re a very young, all female band hailing from Reykjavík, playing a post punk/synth pop hybrid they choose to simply call “synth punk”. It is actually a sound so dark and melancholic, it fits all sorts of events - the girls got to open for THE CURE and PIXIES, and in a few months’ time they’ll be playing the big Icelandic black metal fest Ascension.
KÆLAN MIKLA gave the absolutely perfect start to an absolutely perfect music night with their short and sweet set featuring traditional post punk bass, beats and Laufey Soffía’s impressive (and often shrieking) vocals. We recognised some songs from their excellent ‘Nótt eftir nótt’ album but preferred not to take notes, but fully immerse into KÆLAN MIKLA’s somewhat shamanic, somewhat Nordic goth experience. And rightly so.

After the entrancing Icelandic gloom, French boys BIRDS IN ROW entered the scene with a very literal boom - raging punk guitars, speedy drums and overly aggressive vocals. One could already see guys from local hardcore bands (from LAST HOPE to EXPECTATIONS) gathering around the stage to check the show out.

And there was much to behold - BIRDS IN ROW play with a destructive thermonuclear energy and with stupendous precisioon, delivering blow after blow. And while enjoying the tracks from ‘We Already Lost the World’ (their second album, released last year), we kept on thinking how different all these bands are, but how well they seemed to fit together.

And still, the night’s main attractions were NEIGE and his ALCEST - one of the most notable, brave and inventive projects on today’s metal scene.
We already had some idea of how good of a concert act they were - we had the pleasure of seeing them abroad and in Sofia (they played here back in 2014, at ‘Akademik’ stadium, though most Jared Leto fans there didn’t notice), but were still excited of how their first real gig here will turn out.
We heard important outtakes from ‘Spiritual Instinct’ (‘Protection’, ‘Le miroir’, ‘Sapphire’ and the splendid opener ‘Les jardins de minuit’), as well as fan favorites like the second part of ‘Écailles de lune’, ‘Autre temps’ and ‘Délivrance’, and thanks to the super tight playing and the near-perfect sound, the experience felt surreal and emotionally charged at the same time.
But you know how hard it is to describe a gig that was flawless - it is so meaningless to describe such excitement and immersion in mere words. We might just say that this ALCEST gig was pure magic - thumbs up to all who came to experience it, and bummers for all who decided to skip it.
GALLERY 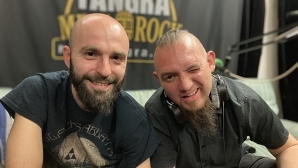