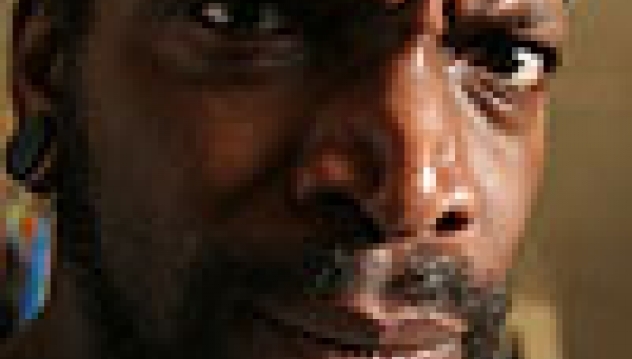 'The name itself - Sepultura has grown bigger, than the actual individuals, the Cavaleras'

Three weeks beforeВ Sepultura's first ever show in Sofia - Bulgaria (6 February) and just a week before the official release dateВ of their new album 'A-Lex', we got vocalist Derrick GreenВ on the hot telephone lineВ with BrazilВ and the big guy told us everything.

It was Nasso Ruskov and Vassil Varbanov sitting here at the radio and Nasso used to live a hell lot in London, so we started with asking about the climate...В В

WHATвЂ™S THE WEATHER LIKE DOWN THERE IN BRAZIL AT THE MOMENT?
ItвЂ™s 30 degrees.

ACTUALLY DO YOU LIKE SNOW?
Actually I do not like snow at all. I donвЂ™t like cold weather. I grew up with a lot of snow in Cleveland, Ohio. And I got sick of it at a very young age so now I canвЂ™t stand it.

YOUR EUROPEAN TOUR WILL START HERE IN SOFIA, BULGARIA ON FEBRUARY 6 AND WE ARE HAVING A HELL OF A LOT OF SNOWвЂ¦. SO YOUвЂ™D BETTER BRING YOUR SKIS HA HA HA.
Naaaaaaaaaaarghhhh

THIS IS GOING TO BE THE FIRST SHOW FROM THE TOUR; DOES IT MEAN THAT YOU ARE NOT GOING TO BE IN GOOD SHAPE?
ItвЂ™s going to be great! I think itвЂ™s exciting to start a tour in a city вЂ¦hum, I donвЂ™t believe weвЂ™ve ever played there??? And we have a lot of energy just because weвЂ™ve been waiting to go on tour for such a long time now.

We have some new songs and we are rehearsing a lot of old songs so it will be the whole history of Sepultura. And itвЂ™s great we are starting it there.

YEAH, YOUвЂ™RE RIGHT. YOU HAVE NEVER PLAYED IN THIS PARTICULAR CITY BUT YOU DID A SHOW IN THE CITY OF KAVARNA ON THE BLACK SEA COAST IN 2007вЂ¦SO YOU ARE COMING TO A DIFFERENT PLACE ANYWAY.
Definitely. I mean I really like playing closed places as well. And this will be like our own show so itвЂ™s very exciting.

YOUR NEW ALBUM вЂA-LEXвЂ™ IS COMING OUT NEXT WEEK. THEY SAY ITвЂ™S BASED ONВ  вЂCLOCKWORK ORANGEвЂ™. PLEASE TELL US вЂ“ ARE WE TALKING ABOUT THE STANLEY KUBRICK MOVIE OR THE ANTHONY BURGESSвЂ™ BOOK?
ItвЂ™s basically centered around the Anthony Burgess book. The book has an extra chapter which made us really interested into doing an album based on the book. The book has no soundtrack and thereвЂ™s no visuals so we had to use a lot of our own imagination. To come up with the music.

YOU SAID THE ALBUM IS BASED ON THE BOOK BUT IвЂ™M SURE YOU ARE FAMILIAR WITH THE MOVIE AS WELL, RIGHT?
ThatвЂ™s correct. Big fan, yeah!

DO YOU REMEMBER MALCOLM McDOWELL WITH HIS FREAKY RENDITION OF вЂIвЂ™M SINGING IN THE RAINвЂ™?
Ha ha ha, yes of course! I definitely remember that part.

DO YOU HAVE YOUR OWN VERSION OF THIS SONG?
Not yet, but IвЂ™m sure by the end of the tour weвЂ™ll have our own version...

I MEAN IS IT A SONG THAT YOU SING SOMETIMES IN THE SHOWER?
IвЂ™ve actually done it at a show, the first time we played Cuba it started to pour rain and then some of the equipment went out. So we had a few seconds to repair it. So it just came to my head that this song I have to sing nowвЂ¦

YOUвЂ™RE HIRED!
(singing) IвЂ™m singing, IвЂ™m singing in the rain.
В
MORE BAD NEWS вЂ“ ITвЂ™S GONNA BE вЂIвЂ™M SINGING IN THE SNOWвЂ™ HERE IN BULGARIA.
He he he, itвЂ™s alright itвЂ™s alright, IвЂ™ll get over it very quickly. But the thing with Malcolm McDowell. The reason he sang that song вЂ“ it was the only song that he could sing from beginning to end.

YOUR PREVIOUS ALBUM вЂDANTE XXIвЂ™..THE COVER ARTWORK WAS DONE BY A GUY CALLED STEPHAN DOITCHINOFF. HIS PARENTS ARE BULGARIAN, BUT THE GUY WAS BORN IN SAO PAOLO AND DOESNвЂ™T SPEAK BULGARIAN AT ALL. DID YOU ACTUALLY MEET THE GUY OR IT WAS A LABEL THING?
No, he was actually a friend of Igor's (Cavalera ed.). And weвЂ™d see his work all over the city. So we asked him to come to the studio at the very beginning of the writing process.

And we gave him ideas and communicated with him face to face exactly which way we were going. And so it really came out to be something very special. He did 10 paintings. The actual artworks for the album are paintings so theyвЂ™re really big pieces.

It was something really very special to work together with him because he's now doing a lot of expositions all over the world.

YOU MENTIONED IGOR FOR A SECOND, SO NOW I HAVE TO ASK YOU THE PAINFUL QUESTION...
Heh

DO YOU HEAR PEOPLE SAYING вЂ“ вЂHEY THESE GUYS ARE COOL BUT NEED TO CHANGE THEIR NAME.вЂќ AND WHAT IS YOUR ANSWER TO THAT?
Well I think it's kind of.....I can understand in the very beginning a lot of people would think that but you got to understand that the band was comprised of four people. In the very beginning of Sepultura.

AND IT STILL IS, I BELIEVE...
Ha ha ha yea. And two of those people who wrote, you know, a majority of the material of the entire history of the band are still in the band. Andreas вЂ“ the lead guitarist, playing all the solos and being a major contribution to the band, is still in the band. And Paolo who is there from the very beginning.

And when we were actually playing with Igor, people suggested the same idea. But when you really believe in a band and work with the band for so many years and you go out on the road and you sacrifice a lot of your life in different things then you donвЂ™t have to listen to the public.

WELL THE THING IS THAT WHEN IGOR WAS STILL IN THE BAND, OBVIOUSLY THE FANS WERE OK, NOT ALL THE FANS OF COURSE...
Yeah, ha ha ha of course not..

Even when Max left the band, trust me, there were many many people saying itвЂ™s over, itвЂ™s done. ThereвЂ™s no way they're gonna be able to continue on without him. There were a lot of people kind of kissing ass, you know, in that aspect, because they didnвЂ™t realise it was a group and it still is a GROUP of people writing, not one person creating everything.

And so I think since Igor has left itвЂ™s been three years now and weвЂ™ve been able to play actually many many places all over the world and thereвЂ™s still a lot of new people that are into Sepultura.

So itвЂ™s like we are able to capture a younger audience and retain some of the old audience but we are moving on and moving forward. And I think thatвЂ™s what makes Sepultura still survive, the fact that we are able to move with times, not to sit in the past and try to recreate something thatвЂ™s never gonna happen again. We look to the future and try to do new things.

GOOD, ANOTHER TRICKY QUESTION NOW AND IT COMES FROM ONE OF OUR LISTENERS CALLED STILGAR. ITвЂ™S A FAMOUS QUESTION THESE DAYS SO YOU MAY BE PREPARED вЂ“ WHAT DO YOU THINK OF ILLEGAL DOWNLOADING?
I think itвЂ™s impossible to stop. ItвЂ™s something you just have to accept, you know. Free music (laughing).

Unfortunately it does harm us in some ways. In many ways actually because the record label is supporting us. And the only way they can support us is by selling CDs. But I believe thereвЂ™s always like options, you know.

I believe that, it depends on the band, you can actually attempt to try to regulate something or actually give out the music for free, for a short time. At the end I think itвЂ™s just important for the fans that really enjoy the music, that love the music to actually HAVE the music, support the band by going to shows and hmвЂ¦ itвЂ™s even better when theyвЂ™re able to buy the CD and have, you know, something very special in their hands.

I can understand it because you want to have an idea what it is that you're gonna buy. And if you really really like it then itвЂ™s great, you know, go out and support the band.

WHICH MEANS THAT NOW WE HAVE TO ASK YOU WHAT WAS THE LAST ALBUM THAT YOU DOWNLOADED?
The latest album that I downloaded was probablyвЂ¦hm...yeah I play music at this club, soвЂ¦

LIKE DJ-ING?
Yeah, kind of like this party I am promoting. It has nothing to do with metal music though (laughing). So the last thing I downloaded was something like Frank Sinatra. Something like old songs.

HAH, PLEASE TELL US вЂ“ WHAT IS THAT...WHERE IS THAT ETHNO SINGING COMING FROM?
ItвЂ™s actually Andreas, Jean вЂ“ our new drummer and IвЂ¦

DRUNK?
вЂ¦.Doing backup vocals and we are doing a sort of like drunken chant. ItвЂ™s kind of like a gang chant. ItвЂ™s actually a representation of that part of the book where Alex's gang is beating up the old drunk in the street.

В But itвЂ™s like a reverse on a row, you know we are the gang and we are drunk and being completely aggressive...

BEATING UP THE SOUND ENGINEER..
Yeah...

OR THE PROMOTERвЂ¦
Exactly ha ha ha, itвЂ™s like a drunken gang chant.

OK WE ARE GOING TO TRY TO MAKE YOU DIE OF DRINKING HERE. THE LOCAL DRINK BY THE WAY IS CALLED RAKIA AND ITвЂ™S MADE OF PLUM OR GRAPEвЂ¦
Rrrrakia, alright.

BRING US 3 PINTS OF CASHASSA AND WEвЂ™LL MAKE A CRAZY MIXED DRINK...
Alright, it sounds like a deal!

YEAH! YOU BRINGING ANY MERCH WITH YOU?
Yes we are. WeвЂ™ll have the whole thing.

OK HAVE A GREAT DAY!
How do you say it in Bulgarian?

PRIATNA VECHER!
I am working on my Bulgarian. I have a friend here whoвЂ™s from there. Maria - sheвЂ™s living in Brazil so sheвЂ™s gonna teach me some words and hopefully IвЂ™ll get better.

Andreas Kisser'2007 - 'The whole Sepultura story was built on challenges.'

Max Cavalera'2008 -'I believe Cavalera Conspiracy is more than a project, but less than a band.'В