BRIAM MAY and SLASH Team Up to Save Badgers 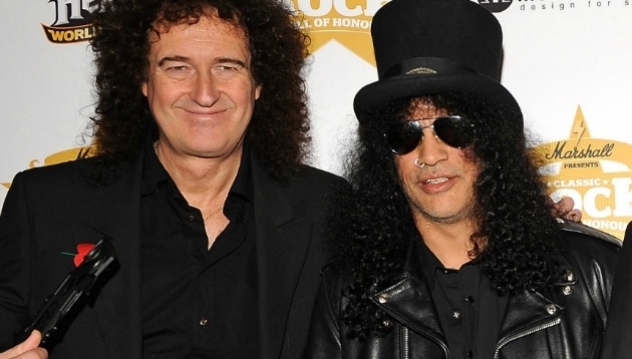 Brian May is serious about putting pressure on the British government to halt a planned mass badger slaughter, and he’s raising a pretty impressive ruckus to prove it.

The Queen guitarist entered London’s Abbey Road Studios on May 28 to lay down tracks for a new song, titled ‘Badger Swagger,’ with a band that included singer Kerry Ellis — and also boasted the involvement of Slash, who added his parts from Los Angeles.

He later told Twitter followers, “Just heard a mix of ‘Badger Swagger.’ Sounds great. Such an honor to be on a record w/ @DrBrianMay & Sir Richard Attenborough.”

May has been advocating for the U.K.’s badger population for some time; as we reported last year, he took to the pages of the Daily Mail in order to raise awareness regarding the slaughter, which was planned in order to combat an outbreak of bovine tuberculosis. According to May, it’s “immoral” and “demonstrably unjustifiable by science”; he accused British politicians of formulating the “appalling policy” because “they are pandering to a powerful farming leadership who helped elect them.”

May’s efforts also include an online petition which urges the government to implement a vaccination program rather than simply shooting the badgers and has, as of this writing, attracted more than 241,000 signatures.

As for ‘Badger Swagger,’ no release date has yet been announced, but May sounds pretty pleased with the end result; following the session, he tweeted, “Great day in Abbey Road Studios today. The new badger track is well heavy. For a while I could forget the tragedy beneath. Great talent here. … @kerryjaneellis1 rocked the chorus. I played MUCH guitar & bass & piano & stuff & prepared a ‘bed’ for @Slash to rock out. Watch dis space.”