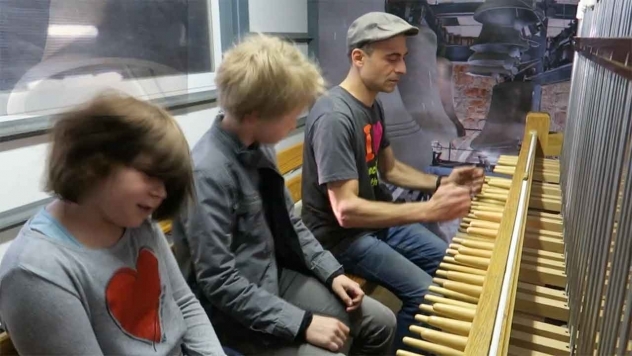 Late last year, we brought you news of a man performing a jaw-dropping rendition of AC/DC's 1980 classic Hells Bells on Europe's largest carillion in a church in Germany.

Now, to celebrate Easter, the same talented carillionist, David Drambyan, has recorded his own take on METALLICA's For Whom The Bell Tolls. Because Easter isn't just about chocolate eggs and M&S' increasingly gratuitous selection of hot cross buns. No, it's about rocking out in front of some church bells with a couple of headbanging children.

You should know that carillion is: "A musical instrument that is typically housed in the bell tower (belfry) of a church or municipal building. The instrument consists of at least 23 cast bronze, cup-shaped bells, which are played serially to produce a melody, or sounded together to play a chord. A traditional manual carillon is played by striking a keyboard – the stick-like keys of which are called batons – with the fists, and by pressing the keys of a pedal keyboard with the feet."

History will be made for another reason on April 19, as Drambyan releases his album, BeerdigungsLäuten UnTot, where the carillion is featured as an instrument in a rock band for the very first time