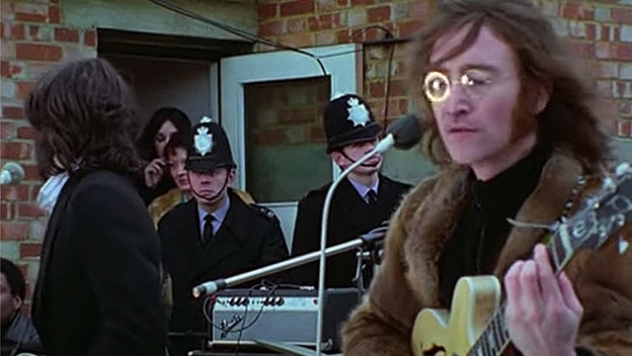 The police officer who halted the BEATLES’ final live performance on Jan. 30, 1969, says he's happy with how he dealt with the situation.

Ray Shayler was a 25-year-old constable with three years’ experience when he led a team of four cops to investigate reports of a disturbance at the BEATLES’ Savile Row headquarters in London – as seen in Michael Lindsay-Hogg’s 1970 documentary movie Let It Be and Peter Jackson’s new series Get Back.


He didn’t know that Lindsay-Hogg expected a police presence, and installed a two-way mirror in the building’s foyer to follow proceedings. Some of the camera operators on the Apple Corps roof had also been instructed to film the officers in action.
“I wouldn’t say I was a fan,” Shayler told the Daily Mail in a new interview. “I didn’t like the Beatles much when they went a bit Hare Krishna, but we had a few Beatles records and LPs at home. I liked their music. But when I got on the roof, I had a job to do and I thought, ‘Well, we’ve got to try and stop this.’”
When he arrived, Shayler said the band members “sort of looked at us and carried on with what they were doing.” He spoke to road manager Mal Evans, telling him “that, much as I appreciated what they were doing, it couldn’t happen any more as it was amounting to a breach of the peace.”
Shayler asked Evans “how long it was going on for. He said, ‘One more record,’ so I said, ‘You might as well be hung for a sheep as for a lamb. Get on with that one, and then it stops.’ It was a discussion; it never got heated.”
Shayler also recalled the reactions he received from the BEATLES as they left at the end of the performance.
“George [Harrison] and John [Lennon] didn’t talk to us, but there was a reason for that,” he said. “They’d recently been caught with cannabis or something and were on bail. It’d been in the papers. Paul [McCartney] was apologetic about the concert and Ringo [Starr] joked about the whole thing, saying, ‘Don’t put the handcuffs on me!’”
Now 77 and retired, Shayler said the incident was so low-key that he “didn’t even put pen to paper to record it.” He said he didn't “think that I let myself down in the way I handled the situation, but I do look sort of severe. ... I blame the helmet.
“Someone asked me how I felt being the man who stopped the Beatles’ concert – but I wouldn’t say that was true,” Shayler added. “I didn’t stop the Beatles. I merely suggested it would be a good idea if they didn’t carry on. If the Beatles had got stroppy or were determined to carry on, then things might have been different. But that wasn’t the way we worked in those days, and I always tried to resolve issues without arresting people.”
Source: ultimateclassicrock.com
Tweet
Previous news: FRANK TURNER releases 'Miranda'
Next news: ODD CREW share video teasers for first new song of the new album