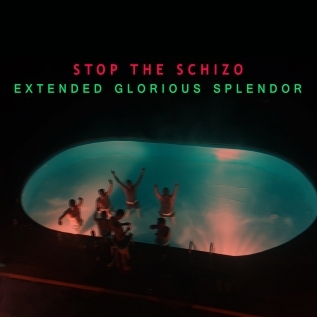 Is it just me, or we have somehow underestimated the new STOP THE SCHIZO EP?! Extended Glorious Splendor appeared almost in the end of 2018, almost modestly. However, you can find some of the catchiest tunes ever created around.

Over the course of the last 4 years SCHIZO has been moving forward on their own terms, obviously not giving a fuck about expectations other than their own. Devoted to making their music, with sparse live performances, but with a definite development in positive direction.
The much anticipated sequel to the debut START sticks to the EP format containing 6 tracks and a remix. You can find it in digital format on various streaming platforms. I sure hope I can hold the physical release someday, because the content is so worth it.
According to the band, Extended Glorious Splendor “tackles the themes of social ineptitude, circularity of relationships and disappointment in humanity and the self, set in the context of mighty stadiums, roaring crowds and space rocket launches”.
Quite accurately, I would say! Tons of lovely riffs and catchy melodies htat stick in your mind so you get them on repeat in your head during the day, while doing whatever.
STOP THE SCHIZO has definitely become even more "pop", but not at the expense of depth - both in the sound and within the message.
DECHO TARALEZHKOV’s lyrics are remarkable, slightly cynical yet contagiously positive. Depth is expressed in the unobtrusive multi-layered arrangement where each instrument takes its own spectrum without competing with the others, thus creating a realistic sense of greater scale and titanic range. Here is the place to admire the production of ANTON VELEV, who humbly stands behind all the mixing and mastering of the album.
In general, Extended Glorious Splendor is the result of the work of a fine-tuned, perfectly clicking band, in which each performer does exactly what the particular track needs.
Richer, far more polished, and much larger than their START EP, the new STOP THE SCHIZO is a brilliant example of good Bulgarian indie/pop music. Fortunately, without the senile pretention and cringy ego wars this segment of Bulgarian music traditionally has to offer.
Tweet
Предишна новина: SOILWORK – ‘Verkligheten’ (2019)
Следваща новина: VELIAN – ‘Godless’ (2019)